After weeks of talking about and craving lamb, I finally broke down and bought some lamb steaks at the store the other day. Partially because my uncle has a sheep farm in Wisconsin, my family and I have always enjoyed this tender and complex meat.  I am not sure if this is the experience of most Midwestern families, but this meat seems like it was about as common as pork in my family kitchen as a child.  Anyways, it had been awhile since I had eaten home-cooked lamb, so I decided it was time to take a stab at cooking it on my own. 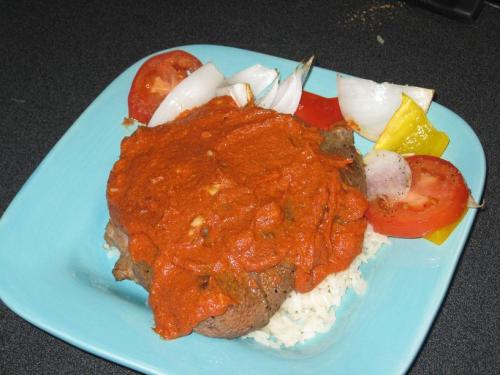 The finished product with seared veggies and rice

After weeks of looking longingly at the overpriced lambchops in our local Kroger, I finally broke down and bought some much cheaper lamb steaks at a (gasp!) Super Wal-Mart.  After much thought, we decided to wing it and use the spice Raz El Hanout as a rub and then create a heavily spiced yogurt-tomato sauce, somewhat similar to a chicken Marsala without the Marsala.

I started by letting the lamb steaks soak in soy sauce for 30 minutes to tenderize them as steaks like this have a tendency to get very dry if not tenderized in advance.  Julia prepared and added a large clove of garlic and the juice from one full lemon to a cup of Greek yogurt, which had to also sit for 30 minutes.  After wiping the soaked steaks with paper towels to get them as dry as possible, I thoroughly rubbed Raz Al Hanout over each steak.  I then poured vegetable oil into a large frying pan, heated it to medium and put both steaks in to start cooking.  I cooked each for about 5 minutes on each side and they were browned on both sides and we were ready to cook the sauce (this part will vary).  I then put the steaks in a pan and covered them with aluminum foil to keep them warm.

Julia added the yogurt and a 1/2 can of tomato paste to the frying pan and we then added about 1 tablespoon of curry, 1 teaspoon of ginger, 1 teaspoon of cumin, and 2 teaspoons of Raz Al Hanout to the sauce.  We let it cook for about 7 or 8 minutes and then covered the steaks with the sauce.

Unfortunately, I realized that the sauce was a just a bit too sour, and I tried to remedy this by a few shakes of cinnamon over the sauce covered steaks, which did not fix the problem  This recipe needs to be tweeked a little bit to make it better.  My thought is that you could add 1 teaspoon of cinnamon and 1 tablespoon of brown sugar while the sauce is in the pan and it would help to balance the acidic sauce.  Also, sad to say that, although my steak was cooked perfectly, Julia’s was way pinker than we would have preferred and she really couldn’t finish it.

I think that this has the potential to be a really good dish, but the execution was just off a bit in this case.  Even though the sauce was a bit too sour, the spices came through very well and complimented the somewhat sweet taste of the lamb with the Raz El Hanout rub.  I am tempted to try this again but with chopped lamb or by partially oven cooking the meat (and of course sweeter spices).  Let me know what you think of the dish and if you have any ideas that you think could improve it as we are well aware that it is imperfect.

Below are the ingredients the spices were approximated:
1 cup of greek yogurt

1 lemon (the juice only)

1 teaspoon of Raz El Hanout (in addition to the rub)